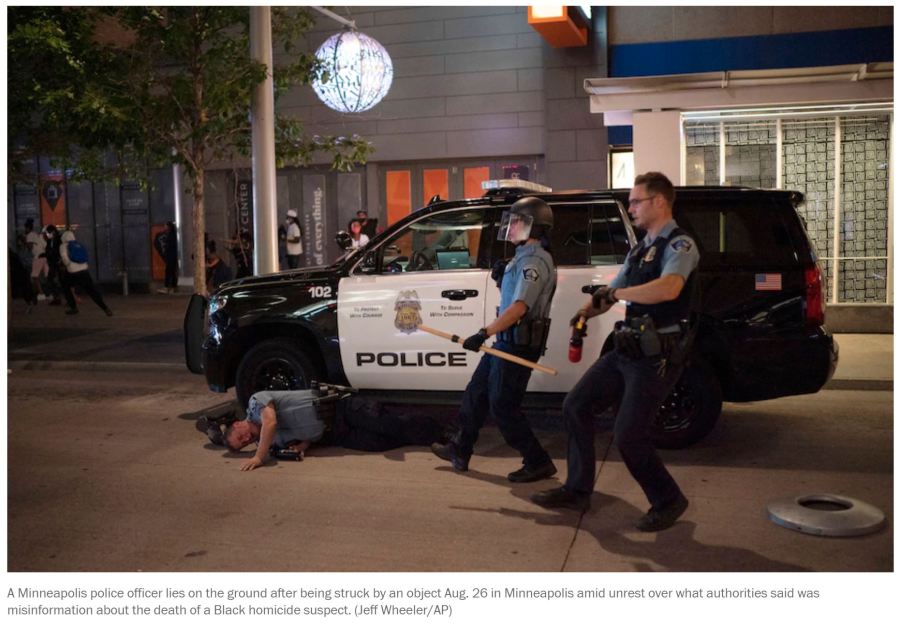 Another little incident of cop misconduct caught on video, and another little self-inflicted wound on public trust of, and respect for, cops. Note to cops: If you can’t hack the job, hit the unemployment line. You aren’t wanted.

From the Seattle Police Department, and The Seattle Times, and The Washington Post.

From the Seattle Police Department, September 24, 2020:

During the demonstration that occurred last night, the Seattle Police Department was notified of an incident where, on video, it appears an SPD officer walked the wheels of his bicycle over an individual lying in the street.  Immediately after being made aware of this incident, SPD activated the Force Investigation Team (FIT) to document and investigate the use of force – as required by policy  — and alerted the Office of Police Accountability (OPA), which also responded to the scene. OPA has opened an investigation into the incident. The officer has been placed on administrative leave.  Following the request from the OPA, the SPD has referred the incident to the King County Sheriff’s Office for a potential criminal investigation.

During the course of the demonstrations, which escalated from property damage to assaulting officers, SPD officers made more than a dozen arrests. Individuals were responsible for attacking a business in the area, launching an incendiary device into the East Precinct nearly hitting officers, throwing rocks and bottles at officers, setting multiple fires, and violently striking an SPD officer in the head with a metal baseball bat.

The SPD is fully committed to the oversight and transparency systems the City has in place. The SPD calls on the community to encourage peaceful protests and conversation, and bring an end to continued destruction and violence.

Note from The Tumalo Lookout

It’s normal for police department and sheriff’s office press releases to include irrelevant information that provides a “counter-balance” to information about misconduct. Here, for example, SPD includes a paragraph describing criminal misconduct of protestors, including an attack on an SPD officer. There’s no excuse for attacking cops. But neither are those attacks in any way an excuse for police misconduct. Unfortunately, cop culture encourages its members to think otherwise.

The King County Sheriff’s Office will investigate a Seattle police officer who was captured on video walking his bike over the head of a person lying on the ground during a protest on Capitol Hill Wednesday night.

The civilian-led Office of Police Accountability (OPA) requested a criminal investigation of the incident by an outside agency after the Seattle Police Department’s Force Investigation Team identified “potential violations of SPD policy, as well as potential criminal conduct,” OPA director Andrew Myerberg said in an email early Thursday. SPD said Thursday it referred the incident to the King County Sheriff’s Office.

Sheriff’s Office spokesman Ryan Abbott said a detective has been assigned to investigate the officer but it’s not clear how long the review will take.

The officer has been placed on paid leave, according to SPD. The department declined to identify or offer other details about the officer.