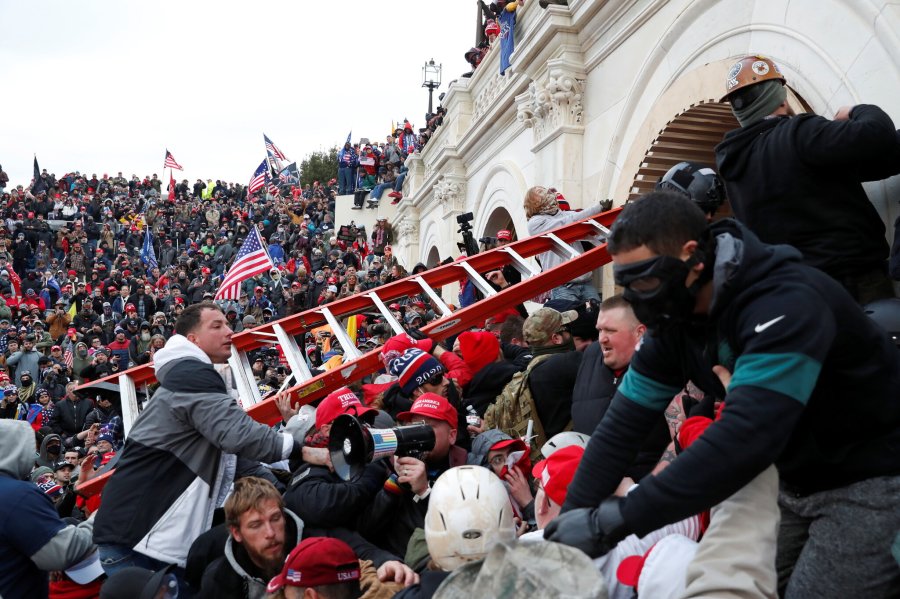 As if being off-duty excuses them.

If they aren’t fired, their chief should be.

Off-duty Virginia police officers arrested for their roles in the U.S. Capitol riot.

Two Virginia police officers, including one who bragged on social media that he didn’t do anything illegal by storming the U.S. Capitol, now face charges from the Department of Justice for their roles in the riot.

Jacob Fracker and Thomas Robertson, who work for the Rocky Mount Police Department, were arrested Wednesday, the Justice Department stated. Both were charged with violent entry and disorderly conduct on Capitol grounds and knowingly entering or remaining in any restricted building or grounds without lawful authority.

The two men, who were both off-duty at the time, were photographed inside the Capitol in front of a statue of John Stark, a major general in the Continental Army during the American Revolution. At least one of the men made an obscene gesture in the photo, which was included in the DOJ’s statement of facts. The men then posted about the riot on social media, the federal agency said.

Robertson, in a statement to Newsweek, admitted he and Fracker sent the photo to their colleagues and that he posted on his own Facebook after it leaked to social media, Vincent Veloz, a special agent with the U.S. Capitol Police Office wrote in a statement with the arrest warrant.

“CNN and the Left are just mad because we actually attacked the government who is the problem and not some random small business … The right IN ONE DAY took the f****** U.S. Capitol. Keep poking us,” Robertson is quoted saying on Facebook.

Veloz also pointed to Robertson’s statement in an Instagram post that he was “proud” of the photo because he was “willing to put skin in the game.”

Fracker also posted on Facebook: “Lol to anyone who’s possibly concerned about the picture of me going around … Sorry I hate freedom? … Not like I did anything illegal.”

The Associated Press reported Sunday that the city had placed both officers on leave. The two men were among at least five people arrested on Wednesday. Get the Coronavirus Watch newsletter in your inbox.

Stay safe and informed with updates on the spread of the coronavirusDelivery: VariesYour Email

The agency has charged dozens in the week since the riot that claimed five lives. On Tuesday, the acting U.S. Attorney General Michael Sherwin said the 160 cases they’d already opened were just the “tip of the iceberg.”