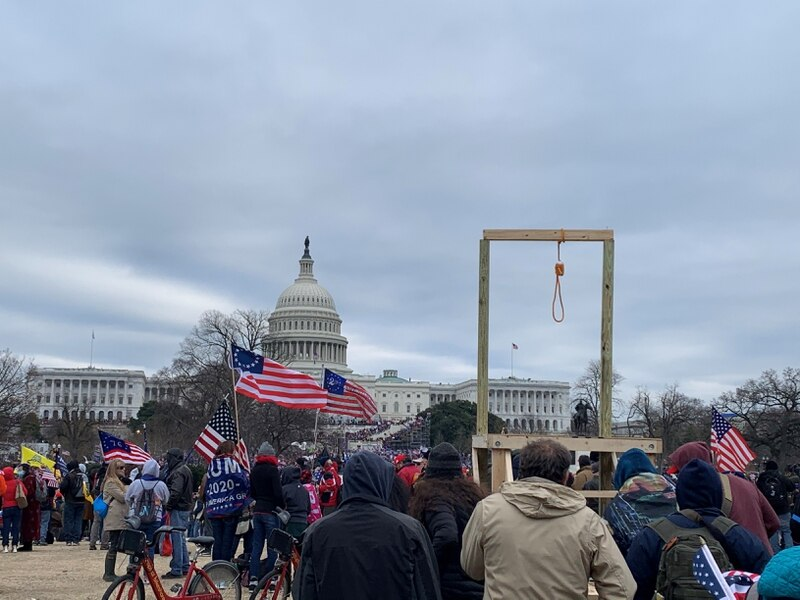 Your unwavering support goes to a seditionist who still says that his insurrectionists posed “zero threat.”

Tell that to the loved ones who lost U.S. Capitol Police Officer Brian D. Sicknick in the insurrection.

Tell it to the widow of USCP Officer Howard Liebengood.

And tell it to the loved ones of DC Metropolitan Police Department (MPD) Officer Jeffrey Smith.

And tell it to Officer Daniel Hodges, who was crushed in a doorway by Trump’s “good people” insurrectionists.

Or tell Officer Mike Fanone, who suffered a heart attack while defending our democratic institutions and our elected representatives, senators, and vice president.

Or any of the other 140 police officers who were injured by Trump’s insurrectionists.

Just don’t ask me why I don’t respect cops anymore.

The former president’s remarks represent perhaps his most serious distortion yet of the events of Jan. 6.

This photo shows supporters of former President Donald Trump, with a Confederate-themed flag among others, listening to him speak as they rally in Washington before the deadly attack on the Capitol. | Evan Vucci/AP Photo

Former President Donald Trump falsely claimed Thursday that his supporters who stormed the Capitol on Jan. 6 posed “zero threat” — despite the fact that five people died as a result of the violent insurrection, including a Capitol Police officer.

The former president’s remarks represent perhaps his most serious distortion yet of the events of Jan. 6, when a mob of pro-Trump rioters stormed the Capitol in an effort to halt the congressional certification of President Joe Biden’s victory in the 2020 election.

Trump himself urged his supporters to march on the Capitol in a fiery speech outside the White House prior to the siege. “If you don’t fight like hell, you’re not going to have a country anymore,” Trump said, among other incendiary statements. One week later, the House impeached him for a second time for inciting the insurrection.

Trump was acquitted by the Senate, but his trial in the chamber presented previously unseen video showing just how close the rioters came to lawmakers and then-Vice President Mike Pence. House impeachment managers also showed footage of violence by the rioters against responding law enforcement officers.

Earlier Thursday, seven House committees launched a sweeping investigation into the federal government’s handling of the insurrection, which law enforcement officials have testified was exacerbated by the Pentagon delaying the deployment of National Guard troops and federal intelligence authorities providing insufficient warnings of the attack.

Prosecutors have arrested more than 300 participants in the Capitol attack, and the former leader of the Justice Department’s Jan. 6 investigation said in an interview Sunday that he believes evidence would support a charge of “seditious conspiracy” against some of the rioters. The head of the Capitol Police officers’ union has indicated that roughly 140 officers were injured in the insurrection.

Take it from Repugnant Senator Ron Johnson of Wisconsin: those rioters weren’t dangerous.

“Even though those thousands of people that were marching to the Capitol were trying to pressure people like me to vote the way they wanted me to vote, I knew those were people that love this country, that truly respect law enforcement, would never do anything to break the law, and so I wasn’t concerned,” Johnson (R-Wis.) said in an interview on conservative radio host Joe Pag’s show Thursday.