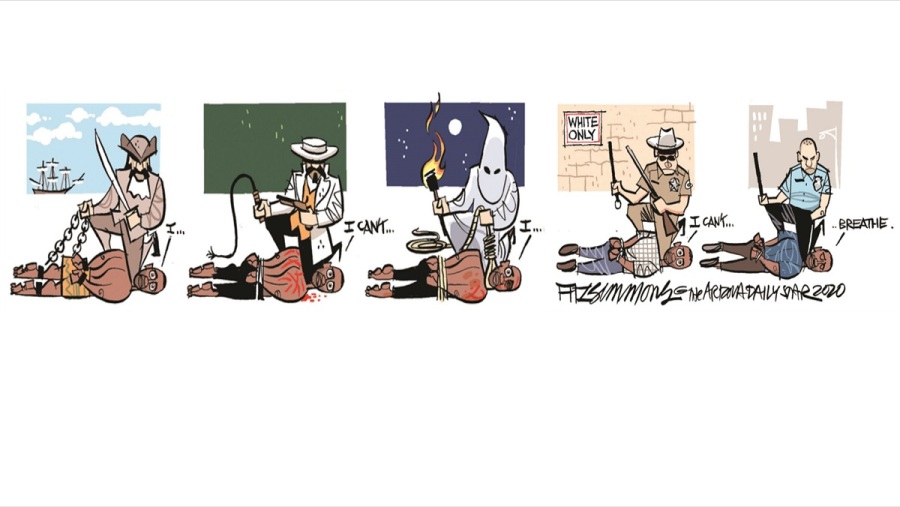 From The New York Times today, with pullout quotes added. Editorial trolling by The Tumalo Lookout is bracketed and separated, to spare the NYT the indignities of my own cynicism.

Note: The title of this Times article is ignorant and misinforming. See my comments following the story.

Police Forces Have Long Tried to Weed Out Extremists in the Ranks. Then Came the Capitol Riot.

At least 30 law enforcement officers from around the country took part in the rally on Jan. 6 that preceded the riot. Many are now being investigated.

For more than three decades, Sheriff Chris West of Canadian County, Okla., a large man whose uniform often includes a Stetson hat, a vest and a gold star badge, devoted his life to law enforcement.

A U.S. Marine Corps veteran, he spent 28 years as a highway patrolman in Oklahoma, working his way up to captain before being elected sheriff of his native county in 2017. He earned the accolade “Oklahoma Sheriff of the Year” in 2019, and won a second term last fall, after running unopposed.

Mr. West said he set his badge and his official role aside when he drove to Washington to support President Donald J. Trump. “I went as a citizen, as Chris West, the individual,” he told a news conference in El Reno, the county seat, after he returned.

“I went as a citizen, as Chris West, the individual,”

Canadian County, Oklahoma, “Sheriff of the Year” and US Marine Corp veteran Chris West, quoted in The New York Times.

By his own account, he marched on the Capitol waving a Trump flag and hollering slogans like “Stop the Steal!” and “We love Trump!” But he said that he did not participate in the storming of the Capitol, and he condemned the attack.

His actions have divided Canadian County, which includes parts of Oklahoma City and the rural areas to its west, with several thousand people signing a petition demanding his removal and even more endorsing a counterclaim supporting him.

[Tumalo Lookout: West is just another thug with a badge and gun who thinks he smoked but didn’t inhale. He’s another pig who can’t tell his right from what’s right. Another shit-hole sheriff who marched to the orders of President Shit-hole himself. Canadian County has at least a few citizens who deserve far better than him.]

He is one of at least 30 police or other law enforcement officers who attended the demonstration on Jan. 6. Many are now facing internal investigations and three have thus far been arrested on federal charges related to breaching the Capitol.

Their presence has brought to a boil questions that have been simmering for years: How many law enforcement officers nationwide subscribe to extreme or anti-government beliefs, and how, precisely, can agencies weed them out? Leaders in law enforcement say that public servants must be held to a higher standard than private individuals when it comes to accepting the results of an election and performing their duties.

Police chiefs from the largest North American cities, meeting in an online conference this past week, agreed to work together to try and block members of far-right organizations or others with radical views from entering their ranks.

“There is zero room, not only in society, but more so in professions of public trust and service, for people to have extremist views, regardless of ideology,” said Art Acevedo, the Houston police chief and president of the Major Cities Chiefs Association, which includes senior police officials from almost 90 American and Canadian cities. President Biden’s goal of addressing domestic extremism will partly hinge on the ability to curb its spread in police departments and the military, experts noted.

“There is zero room, not only in society, but more so in professions of public trust and service, for people to have extremist views, regardless of ideology,”

Art Acevedo, Houston police chief and president of the Major Cities Chiefs Association. [Sorry, Art: you’re one of the people in law enforcement I still have respect for, but this statement is just bullshit for public consumption. Very obviously, there is enormous room for extremists, in both law enforcement and American society — and there always has been. Your profession has a 400 year history of accepting it within the ranks.]

In recent years, police or other agencies in Virginia, Florida, Nebraska, Louisiana, Michigan and Texas have all fired officers belonging to the Ku Klux Klan. In Philadelphia in 2019, the Police Department announced that 13 officers would be dismissed among the 72 who were placed on administrative leave because of racist Facebook posts.

For decades, Los Angeles County has downplayed accusations that sheriff’s deputies repeatedly organized secret white-supremacist groups with their own tattoos and hand signs. But a recent study by the office of the Los Angeles County Counsel concluded that the county has paid out some $55 million to settle lawsuits accusing such groups of malign influence.

Sometimes groups opposed to the government emerge within law enforcement itself. Hundreds have joined the Constitutional Sheriffs and Peace Officers Association, for example, which claims that sheriffs have the last word on whether any U.S. or local law is constitutional and should be enforced or not.

Hundreds have joined the Constitutional Sheriffs and Peace Officers Association, for example, which claims that sheriffs have the last word on whether any U.S. or local law is constitutional and should be enforced or not.

During his presidency, Mr. Trump often declared himself a friend of the police, and many police unions endorsed him. Police officers enjoy the same rights as all citizens in supporting political candidates, but the problem comes when they take it a step further into anti-government activism, senior police officials and law enforcement experts said.

Recently, during protests prompted by the death of George Floyd in police custody, far-right organizers, eager to recruit police or military veterans, portrayed themselves as allies to law enforcement, said Brian Levin, a former policeman and the director of the Center for the Study of Hate and Extremism at California State University, San Bernardino.

Various organizations talked about helping to preserve law and order while amplifying distorted claims about election fraud or chaos at Black Lives Matter protests. It was a “false alliance,” Mr. Levin said, not least because such organizations seek to undermine the government. At protests members of these groups often exhibited the Thin Blue Line flag — a black-and-white American flag with one navy blue stripe down the middle meant to symbolize solidarity with the police.

Some rioters brandished that flag on Jan. 6 even as Capitol Police officers were assaulted and one killed. The flag “has been hijacked by extremists,” Mr. Acevedo said. “These people act like they are so pro-police, yet they are beating cops.”

One Houston police officer, Tam Dinh Pham, an 18-year veteran, resigned just before he was arrested on Jan. 19 on charges of illegally entering the Capitol. Mr. Pham, 48, first denied it, then told F.B.I. agents that he wanted to “see history,” according to the criminal complaint. Two officers in a small Virginia town who were charged were fired.

Mr. Pham has not been linked to any extremist organization, but Mr. Acevedo used his example to conduct an animated call and response with police cadets on their first day of training last month. The Houston Police published a video of the exchange, including these excerpts:

“If anyone in this room right now believes that anyone needed to be in that Capitol building, you need to check out now! Do you understand me?”

“Because you will not survive in this department with that mind-set. You understand that?”

“Is there room for hate?”

“Is there room for discrimination?”

“Is there room for a militia in this department or any other police department?”

He questioned the cadets, asking four times whether they understood that they must report any officer with extremist sympathies. Recently a cadet who bragged about belonging to the Aryan Brotherhood, a neo-Nazi criminal gang, was reported by a fellow cadet and dismissed.

“I think we are all pretty pissed off right now because we had cops thinking it’s OK to storm our nation’s Capitol,” Mr. Acevedo told the cadets. “Those people are absolute traitors to our nation, to our oath of office.”

“I think we are all pretty pissed off right now because we had cops thinking it’s OK to storm our nation’s Capitol,” Mr. Acevedo told the cadets. “Those people are absolute traitors to our nation, to our oath of office.”

The number of extremists within law enforcement is unknown, with the police calling them a fringe, just as in the general public. With 18,000 law enforcement agencies nationwide, many of them small and lacking resources, there is a patchwork of rules and practices for how to weed out people perceived as threats. Dismissal is not automatic.

I really dislike the headline of this New York Times story, “Police Forces Have Long Tried to Weed Out Extremists….”

Bullshit. I don’t believe that in the least. It’s propaganda promoted by cops and sheriffs, and it’s a lie. And, like so most Americans and news organizations, The Times has bought into it.

That’s 400 years of looking the other way.

And it’s 400 years of career-building by the accused pigs and their enablers.

That sure as hell ain’t “trying to weed out extremism.”