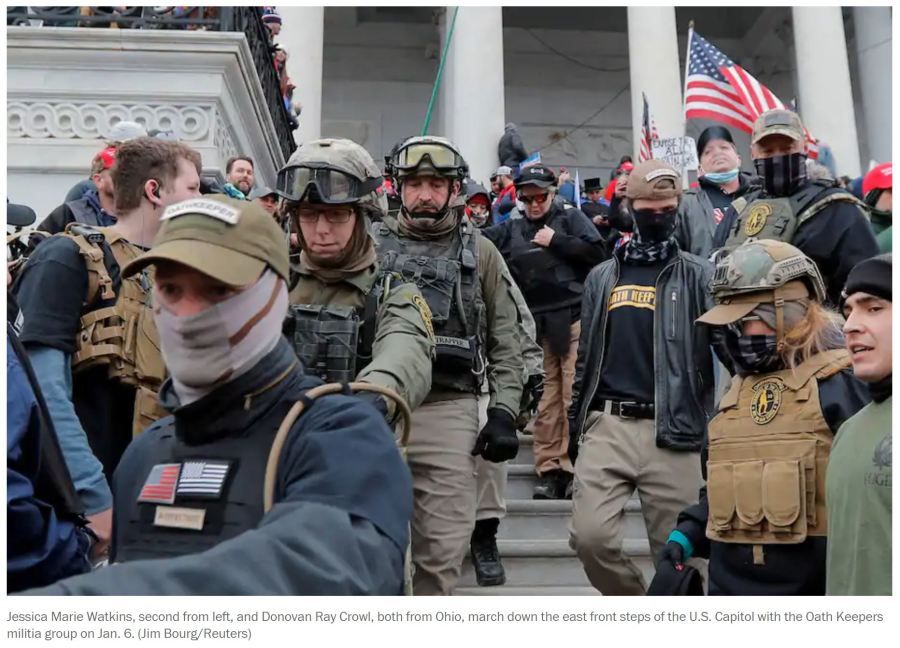 After all, we wouldn’t let Dear Leader or anyone important to be held accountable for their roles in the insurrection, now, would we? That just wouldn’t be American.

But somebody gots to pay. So let’s focus on the minions.

You know, the useful stooges. The tools.

Besides, one of these little tools, by name of Thomas E. Caldwell, has special meaning to us. He’s former FBI. Or, so his attorney claims.

U.S. authorities have charged two more alleged members of the self-styled Oath Keepers militia in Ohio with participating in the Jan. 6 breach of the U.S. Capitol, asserting that a married Cincinnati-area couple was recruited by previously indicted retired Army captain Jessica Watkins.

Sandra Parker, 60, and Bennie Parker, 70, operated as a group with the “Oath Keepers militia” that invaded the Capitol in one single-file, combat-dressed “stack,” FBI charging papers alleged….

….FBI charging papers say that Bennie Parker was recruited by Watkins, the alleged founder of the Ohio State Regular Militia and leader of a unit of the Oath Keepers, an anti-government militia group that aims to recruit military, law enforcement and first responders and whose members have shown up armed at political protests in support of right-wing causes….

….Three U.S. military veterans — Watkins, 38, and Donovan Ray Crowl, 50, both of Woodstock, Ohio, and Thomas E. Caldwell, 66, of Berryville, Va. — began recruiting in November for the action, trained in Ohio and North Carolina and coordinated plans to bring a bus of other members and weapons to Washington, according to FBI charging papers. The three are accused of conspiring to obstruct Congress and other counts, punishable by up to 20 years in prison….

….Caldwell attorney Thomas K. Plofchan Jr. has called the indictment of the three “a deliberate attempt to find a scapegoat for activities on January 6.”

Caldwell is “a highly decorated veteran” and former FBI official who “expects to have the charges dismissed or to be acquitted at trial,” Plofchan has argued. He said Caldwell is “not a member of the Oath Keepers and never entered the Capitol that day.”

A former U.S. Navy intelligence officer and FBI official from Virginia has emerged as a “key figure” in the federal investigation of the Jan. 6 Capitol breach, as U.S. prosecutors alleged Thursday that he organized a group of trained fighters and was in contact with self-styled militia groups including the Proud Boys, Oath Keepers and Three Percenters.

In asking a federal judge to detain Thomas Edward Caldwell, 66, pending trial, prosecutors revealed some of the most explicit evidence to date of discussions allegedly indicating coordination and planning among groups under scrutiny for the assault on Congress that left one police officer and four others dead, delayed the confirmation of President Biden’s victory and led to charges against more than 200 people.

Prosecutors allege Caldwell used his military and law enforcement background to plan violence — including possible snipers and weapons stashed on a boat along the Potomac River — weeks ahead of the Capitol insurrection. Caldwell, of Berryville, Va., is charged on counts of conspiracy, obstructing an official proceeding, trespassing, destruction of government property, and aiding and abetting….

…. Oath Keepers founder Stewart Rhodes — identified as Person One by prosecutorsin documents charging Caldwell— called on members of the group to “stand tall in support of President Trump” on Jan. 6. and, prosecutors say, Caldwell responded. He had been coordinating with the Oath Keepers since the week after the election, prosecutors allege, when he hosted members at his Virginia home for a pro-Trump protest that turned violent.

“Next time (and there WILL be a next time) we will have learned and we will be stronger,” …. “I think there will be real violence for all of us next time. . . . I am already working on the next D.C. op.”

“Next time (and there WILL be a next time) we will have learned and we will be stronger,” he messaged others afterward, according to the court documents. “I think there will be real violence for all of us next time. . . . I am already working on the next D.C. op.”

Or, try this on for size, yet again from The Washington Post:

The feds say he’s an extremist leader who directed rioters. He also had top-secret clearance and worked for the FBI, attorney says.

But Caldwell’s attorney, Thomas K. Plofchan, says he isn’t just a retired lieutenant commander. Caldwell also had a top-secret security clearance and served as a section chief for the FBI after leaving the armed forces in 2009, Plofchan said.

But Caldwell’s attorney, Thomas K. Plofchan, says he isn’t just a retired lieutenant commander. Caldwell also had a top-secret security clearance and served as a section chief for the FBI after leaving the armed forces in 2009, Plofchan said.

Those details were revealed in a motion filed Monday asking a judge to release Caldwell from custody, citing his long military career and ability to pass vetting for the high-security clearance. His attorney also said that Caldwell has disabilities from his military service that would have prevented him from storming the Capitol.

The FBI did not immediately return an inquiry late Monday about Caldwell’s past employment status. Caldwell’s filing, which says he was paid as a GS-12, does not explain how he could have served as an FBI section chief while also being classified at a significantly lower federal pay scale than typically comes with such a position.

The claims about Caldwell’s high-security clearance and FBI service add to concerns about extremism in the military and law enforcement. The indictments against numerous alleged rioters with military and police connections have led local agencies to open investigations and the Pentagon to order each military branch to dedicate time to addressing the problem in the coming months.

“The presence of law enforcement officers in the riot reinforces and substantiates the greatest fears many in the public had in the nature of law enforcement in the United States,” Michael German, a former FBI special agent and fellow with the Brennan Center for Justice’s Liberty and National Security Program, told The Washington Post.AD

“It’s incumbent on the Justice Department, if it wants to restore that confidence, to act quickly” to hold the most violent Capitol rioters accountable, he added….

My, my, how the FBI has eroded since the days of that old suit-and-tie-squeaky-clean-integrity-charm bullshit propaganda. The quality of their recruits has apparently been on the slide for some time. If they weren’t on the steep downhill before, Trump made sure to finish them off.

But, hey, we protected Dear Leader, didn’t we? Everything’s cool.

And we have Ted Cruz and his colleagues to thank for that. Cruz deserves a vacation, don’t you think? Maybe somewhere nice and sunny and warm, like Cancun.