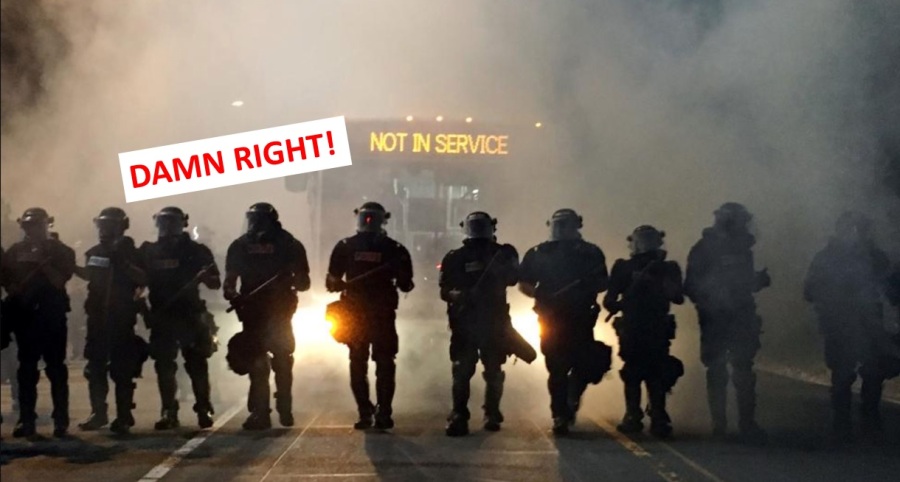 This is what makes the entire “profession” of law enforcement so loathsome.

When you read this story from the September 8 edition of OregonLive, take a moment and see why it gets so many tags. There’s extremist politics, advocacy of violence against BLM, bigotry, institutional racism, the criminal-industrial complex, lies, cop “humor,” and oh so many more of the finest qualities that typify American law enforcement.

Frankly, I’m sick of it all. Portlandia is a lunatic bin with dangerous assholes all over the political spectrum, left and right. But cop culture has only one kind of politics: right-wing extremism. All these assholes deserve each other.

This kind of response by places like Knoxville makes me loathe cops everywhere. What a bunch of low-life, bigoted, fascist henchmen.

America sure as hell doesn’t deserve pigs like this.

Reprinted from OregonLive: The Oregonian, September 8, 2021:

The officer was investigated by the internal affairs division of the Knoxville Police Department and the FBI.Mark Graves/Staff

By The Oregonian/OregonLive staff

A police officer in Knoxville, Tennessee, was cleared of any wrongdoing by an internal affairs investigation after posting on social media that he was considering setting up a business to “hunt the left” in Portland.

WBIR News reported Bernhard “Chip” Braeuner, who works on the Knoxville Police Department’s organized crime unit and has been with the department for 27 years, would suffer no repercussions after social media posts were flagged by the FBI and the city’s police oversight committee.

“Some of those posts seem to advocate physical harm and/or death of people who had differing views,” LaKenya Middlebrook, the oversight committee’s then-executive director, said at an Aug. 26 meeting, according to the news outlet.

The FBI first began looking into Braeuner’s online activity after the agency got a tip after the Jan. 6 U.S. Capitol insurrection. The tip, sent by anonymous text, said Braeuner had been using an alias on Facebook to “share his conservative views with others in law enforcement and elsewhere,” the tip said, according to WBIR. “He had several posts about the coming violence on his page before January 6 as well as several private posts. Most seem to have been removed since.”

One of Braeuner’s posts showed a picture of a pickup truck with blood on it and the caption, “The new Dodge RAM prostester [sic] edition.” In another, Braeuner complained about social media censorship and wrote, “The next step may very well be fighting in the streets after an election is stolen and the deep state FBI is used against the citizens of this country for thinking for themselves.”

In the comments on one post, Braeuner suggested establishing a business he called a “Portland safari,” where clients would be able to “hunt the left.”

“May God grant them martyrdom in the name of their BLM racial purity and communism,” he wrote, according to WBIR. “They obviously need more martyrs so they know what they are truly fighting for.”

Braeuner was asked about that particular post by an internal affairs investigator, WBIR reported.

“As far as ever espousing violence, I never had,” he said. “I hope everybody can see that this is kind of a farfetched … kind of thing. It’s, it’s not something that I can really do or would do, have any inclination to do, you know.”

“So you have no intent to go hunt liberals?” the internal affairs investigator asked.

“No,” Braeuner replied. He also said the posts were nothing more than “dark humor.”

WBIR reported the department’s social media policy prohibits officers from posting material that impedes the performance of duties or negatively affects the department’s public image. Braeuner was cleared, in part, because the posts were made in a private group and Braeuner never identified himself as a police officer, Knoxville Police Chief Eve Thomas told the oversight committee.

“That post was shared outside of a group. This particular gentleman has his own group that he keeps private,” Thomas told the committee, according to WBIR. “In my experience he has not expressed any of these things in a professional capacity. We know when we put on our uniforms, our job is to protect everyone’s rights no matter what we believe.”